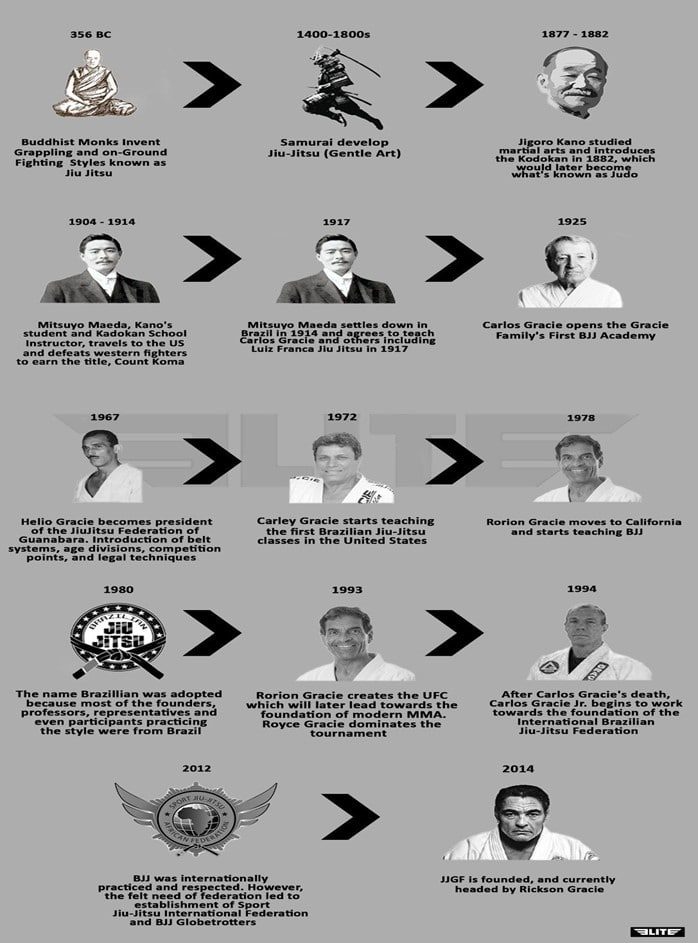 Where did Brazilian Jiu Jitsu Come From? Your Guide to BJJ History

Where did Brazilian Jiu Jitsu Come From?

Your Guide to BJJ History

Most people think they know the difference between Jiu-Jitsu and Brazilian Jiu-Jitsu. While there is much to know, what helps is knowing the origins of BJJ.

So, let’s break this down in chronological order that will go over major developments in the on-the-ground grappling fighting style known as Brazilian jiu-jitsu. 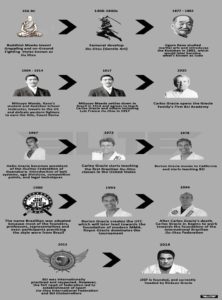 Monks in Asia Present the Art of On-Ground Fighting

The earliest evidence of grappling styles of fighting can be traced back to ancient Indian civilizations when Buddhist monks traversed the region to travel through the mountainous North.

Throughout their journey, they would be attacked by bandits and thieves looking to loot their belongings. Having sworn an oath of non-violence, the monks never took up arms against their wrongdoers and found this to be a realistic problem.

This is when they developed what we refer to as the Jiu-Jitsu fighting style. The word jiu-jitsu itself means gentle art, implying the idea that there will be no use of more violence than is necessary to mitigate it.

This technique involved using your opponent’s body against them to subdue them or to make them give up their violent intentions.

In the 1400’s ancient Japan, the Samurai warrior class learned and developed this fighting style to aid them in situations when they were disarmed. While they did more than just subdue their opponent, the principle remained the same.

In the 1870’s Jigoro Kano, a famous practitioner of Jiu-Jitsu developed what he called Kadokan and what would be referred to in modern-day civilization as Judo.

This art involved free practice which was a concept that deviated from conventional partner training. Jigoro Kano started the first school that taught Kadokan.

A disciple of Kano, Mitsuyo Maeda is the legend of the East who brought the art of Judo to the West and conquered any and every fighter who accepted his challenge of a fight, earning him the title of Count Koma.

After learning the art of Judo from Maeda, Carlos taught his brothers, one of whom was Helio Gracie, all that he had learned from the legendary Count Koma.

While all of them developed great skills, Helio and Carlos stood out as unrivaled fighters.

Carlos and Helio Gracie developed upon teachings from Maeda and trained under him for several years. Later on, they moved to Rio de Janeiro, and together, both brothers became the founders of Gracie Jiu Jitsu, the first official school of Brazilian Jiu Jitsu.

Establishment of Jiu-Jitsu Federation of Guanabara

Carlson Gracie, son of Carlos Gracie, was born in the 1930s and from the age of just 5, started competing in MMA competitions.

Having grown up as a first-class unrivaled champion who’d just dominated Waldemar “The Black Panther” Santana in front of a crowd of 25,000 people, Carlson did more than just prove his skills and the effectiveness of the martial art of Brazilian Jiu Jitsu.

When he got married and wanted to start a family, he was told to start a school somewhere and teach in order to make a living by his father and uncle, Carlos and Helio Gracie.

Having no other choice, Carlos came to Copacabana and started one of the most famous schools of BJJ, Clube Carlson Gracie de Jiu-Jitsu on Rua Figueiredo de Magalhães.

BJJ Comes to the US

The 11lth child of Carlos Gracie, by the name of Carley Gracie, was also sent to open a school in the US, the first-ever in the family. In fact, this was the first time Brazilian Jiu Jitsu was introduced on American soil.

Having laid an impression but still facing controversial reviews as a fighting style, BJJ had to do more to become part of the mainstream MMA.

Formation of the UFC by Rorion Gracie

Helio Gracie’s son, Rorion Gracie, another BJJ Grandmaster, laid the foundations of the Ultimate Fighting Championship, the grandest contest in the world of martial arts to decide which fighting style dominates all others.

Establishment of the IBJJF, SJJIF, and BJJ Globetrotters

The first UFC competition that featured BJJ had Royce Gracie, who dominated all other fighters and came out victorious with his ground-grappling guard-pulling fighting style.

Once BJJ became mainstream, judos and schools started popping up around the states and everybody wanted to buy BJJ gis and participate in competitions, the Gracie family felt the need to standardize things.

Along with other federation members and practitioners from around the world, the IBJJF, SJJIF, and the BJJ Globetrotters were formed in that respective order to standardize BJJ competition rules, belt ranking systems, etc.

While this is a brief history, hopefully, the picture has become much clearer as to what brought about the modern martial art of Brazilian Jiu Jitsu.