We wanted to share this inspiring article on pushing through limits and doing the unexpected from Psychology Today. Martial arts is all about breaking barriers and our Tang Soo Do Black Belt training program does just that!

How My Son’s Black Belt Reveals the Biggest Scientific Error

Why everything you know may be wrong.

After an 11-year effort, my 15-year old son earned his Black Belt in mixed martial arts yesterday. My wife and I are so very proud of him. In his five-month-long Black Belt exam, he showed his amazing strength, flexibility, and skill – and even more his persistence and heart.

And he also revealed the biggest scientific error at loose in the world today.

It’s an error so fundamental and pervasive that it’s hard to wrap one’s head around it. Most readers will not believe it, and I’m braced for the angry comments I may get. Yet what I will say has been scientifically established for nearly a century.

But first, my son.

My wife and I began to realize something was wrong in early pre-school. Stevie could not do what other kids could do. He couldn’t throw, or catch, or kick, or climb. His hands got tired in minutes if he tried to draw; he could not hold a knife or fork. In pre-school, no one would pick him for team games at recess – kids groaned when he eventually was.

We put him into mixed martial arts figuring at least he’d be compared to his own baseline. He came under the influence of a wonderful teacher there, Michelle Clancy, who was kind and inspiring.

Right before first grade, his pediatrician referred him for an evaluation. On standardized tests, his physical skills were those of someone less than half his age. “Moderate hypotonia,” the report said. It was genetic. Yes, with difficulty he could improve but he’d never be good at anything physical.

When my son later joined the “Black Belt Club” we smiled and were supportive, but words echoed silently inside our heads like “genetic” and “never.”

When Michelle created her own “DojoReno” three and a half years ago we were among the first to sign on. He kept getting better, but Black Belt dreams still seemed remote. Put aside skills – how about the physical standards he’d need to meet? Fifty “nose kissing” push-ups? How? A timed two-mile run and push-up combination I myself could never have done? Not likely!

I told Max the story of his diagnosis and history. He listened respectfully. “We don’t care about that,” he said, with an air of finality. “Let’s see what he can do”.

His sessions were creative, focused, long, unusual. For me, as a psychologist, I found the workouts fascinating. He’d describe a challenge then pause as if changing his mind. “Stevie, I’m not sure you can do that,” he’d say, with an almost unnoticeable twinkle in his eye. Emotion now properly engaged, Stevie would answer, “I think I can”, and he’d then give 110 percent to an exercise I’d never seen before. “This is probably too much,” Max would say. “Well, let me try.” would be the retort, as he did some bizarre combination of strength and balance that Max seemingly made up on the spot. It wasn’t just Stevie’s muscles Max was training, it was his mental engagement, excitement, and motivation. In two weeks, Stevie was showing strength and stamina beyond anything we’d ever seen before. His adolescent growth spurt hit, and a cycle of self-confidence and barrier-busting effort set in.

Now, years later, he’s done those push-ups, made those runs, and passed that months-long set of qualifying exams. Now, years later, his speed, kicking, and punching strength are almost frightening. And as of that fine day called yesterday, our sweet little boy now grown-up has a Black Belt in Mixed Martial Arts.

We are so very proud of him.

Here is the error.

Since 1931 when it was first proven in physics, we’ve known you cannot properly predict the trajectory of an individual on the basis of averages and variations within groups of individuals. It’s mathematically illegitimate, except under a few extraordinary circumstances that apply to no living things (indeed they apply to a very small list of inanimate things, like a few noble gases).

The proof is called the ergodic theorem.

Virtually all of our concepts about human abilities, tendencies, and qualities contain the ergodic error and the falsehoods that come along with it. Physical strength. Intelligence. Personality. Mental disorders. Learning disabilities. Talent. Creativity. Even the needlessly crude ways we think of genetics, or trauma, or injury, or motivation.

And the vast majority of psychological scientific methods that give us such concepts: psychometrics, randomized trials, mediation, standardized testing.

Human development is idiographic first and nomothetic second. Humans are complex evolving networks, and no one thing makes sense except in context over time compared to within-person variation. Yes, your genome matters, but it plays out individually, in context, and interacting with epigenetics, developmental history, environment, behavior, and culture. So too with every human trait.

It does us little good to simplify this complexity with concepts like “weak” or “hypotonia”; never mind “mentally ill,” “unintelligent,” and on, and on, and on, until you get tired of the clown suits we force ourselves and others to live inside.

Some babies scoot on their diapered butt for several months and then stand up and walk. Every pediatrician who is properly educated “knows” that’s abnormal.

No, it isn’t. It’s one of more than a dozen known pathways to walking.

People are individuals, not averages.

Yesterday I watched a “weak” human child, my son, earning a Black Belt. He earned it, due to his heart, his persistence, and the miracle of good coaching. Thanks, Michelle. Thanks, Max. I’ll never again use “weak” to describe a human being without also using scare quotes.

I cannot say for certain. We have a lot to learn.

Get Your Black Belt in Tang Soo Do!

Earning a Black Belt is a very prestigious accomplishment and not many reach this goal. If you’d like to test your limits and see what you can achieve, check out our Tang Soo Do program for all ages! Tang Soo Do is a martial arts style that includes kicks, punches, weapons, sparring and self-defense. Use our contact page to learn more.

Come see why parents and students love us! Check out our Martial Arts programs in Muay Thai, Jiu Jitsu, and Tang Soo Do. 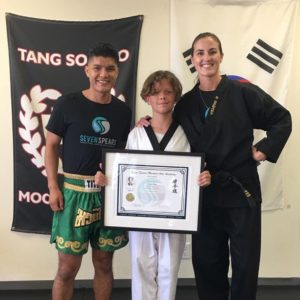